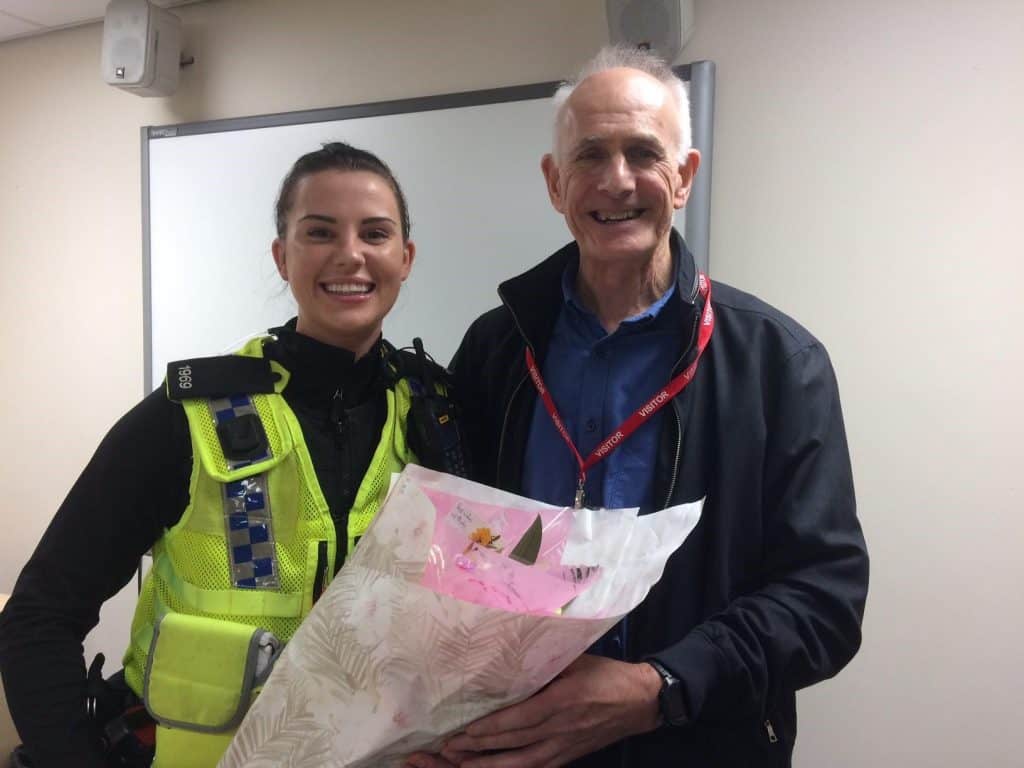 PC Palmowski was reunited with Mr Brogan at Maltby Police Station, to discuss life since surgery and to allow Mr Brogan a chance to pass on his thanks in person.

A community figure who collapsed and almost died whilst running in Rotherham today thanked the Rotherham PC who saved his life.

PC Nicole Palmowski was on a routine patrol when she saw Mr Brogan slumped against a wall unresponsive and pulled over to try and help.

James Brogan (68) of Broom was running along Wickersley Road in April when he collapsed and almost died.

Earlier this week Jim caught up with PC Palmowski and thanked the PC who came to his aid and saved his life.

Thanks to the officers quick thinking and treatment at the scene alongside a retired police officer who was passing at the time they were able to save Mr Brogan’s life.

Mr Brogan said: “I personally have no recollection whatsoever of the incident as I became unconscious, but it is my understanding that a police officer got me breathing again as we awaited the attendance of an ambulance,”

“Following on from the incident I have obtained first class treatment from the NHS at Rotherham and The Northern General Hospitals. However, I am certain that it was the prompt action of the police officers that saved my life.”

“Their actions bring great credit to South Yorkshire Police and the police officers involved deserve nothing but the highest praise for their superbly professional actions that day.”

PC Palmowski’s training officer Sergeant Matthew Frogson nominated PC Palmowski for a Royal Humane Society award for her actions on the day and has since found out that she will receive her award later in 2019.

Rotherham Chief Superintendent Rob Odell said: “PC Palmowski’s actions on that day saved a man’s life and we cannot underestimate how important her reaction was in that short space of time.”

“Both PC Palmowski and the retired police officer involved are great examples of the commitment and dedication our officers have, even though they would say they were just doing their job.”